< Back to Archive Downloads

The purchases are unusual for their scale and reflect both the growing ranks of institutional investors aiming to boost their exposure to the buoyant agricultural real estate sector and a tight market in which few attractive properties are available for sale. 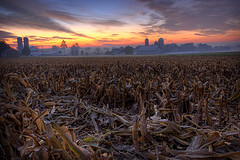 Through September, Midwest land values are up 13% from a year ago, according to a survey of agricultural bankers by the Federal Reserve Bank of Chicago. That pace is down from 14% and 22% annual gains in 2010 and 2011. Speaking at a conference hosted by the Chicago Fed last week, Murray Wise, founder of Westchester Group—a  Champaign, Ill. farm asset manager now majority owned by New York retirement fund manager TIAA-CREF—speculated that as much as $10 billion in institutional capital is searching for a home in U.S. agricultural land. “Institutional investors are very frustrated at the moment,” says Mr. Wise. “They feel almost locked out of the Midwest marketplace as rent income yields continue to decline and the cash position of the operating farmer in most cases is too much for them to compete with.”

Though farm rents are on the upswing, land prices are rising faster, pushing rent income yields from 5% in 2006-2007 to 3%-4% today. “Many institutional investors are having a hard time accepting a 4% cash-on-cash return, and in some cases less than 4%, when in fact they want 7% ideally,” says Mr. Wise.

The tightening land market presents a growing hurdle for farm investment managers who are under pressure to put client cash to work. At mid-year, UBS AgriVest had $288.6 million of client funds awaiting investment in farmland. In a June meeting with the Alaska Retirement Management Board—which owns $640 million in U.S. farmland managed by UBS AgriVest and Hancock Agricultural Investment Group—James McCandless, president of UBS AgriVest, told Alaska officials he wouldn’t begin investing a September 2011 $100 million mandate from the Iowa Public Employees’ Retirement System until he had found property for $41.6 million of Alaska funds awaiting investment and $147 million queued up for the UBS AgriVest Farmland Fund.

On November 13th, UBS AgriVest paid $67.5 million or about $6,776 per acre for 9,965 acres in southwest Wisconsin. The deal ranks among the biggest sales of Wisconsin cropland in recent memory and is unusual for the UBS fund since its average farm investment is $4.8 million. The purchase also marks UBS AgriVest’ s return to the Midwest after at least three years, while it sought more attractively priced farm properties in Georgia, Texas, Arizona, Idaho and Oregon. The fund acquired just one property in the first half of this year. In June, it paid $4.5 million for an irrigated wine grape vineyard in Sonoma County, Calif. Some market observers suggest UBS AgriVest may have reduced its rent income yield threshold in order to invest its mounting pile of investment cash. Mr. McCandless didn’t respond to an email inquiry.

The Wisconsin seller is Cass Realty Company LLC, an investment vehicle of Ray Eckstein, a Cassville, Wis. native who founded Marquette Transportation, a Paducah, Ky.-based tugboat operator serving the Mississippi River System and the Gulf Intracoastal Waterway. Most of the land sale proceeds are expected to go to Eckstein philanthropic organizations. In 2007, The Ray & Kay Eckstein Charitable Trust donated $51 million toward construction of a new law school facility at Marquette University.

Mr. Eckstein was the largest private landowner in Wisconsin’s Grant County. The property sold to UBS AgriVest was assembled over the last 30 years or so and includes an estimated 8,300 tillable acres spread across a patchwork of mostly 200 to 400-acre tracts, and 1.6 million bushels of grain storage.

“Mr. Eckstein is in his late 80s and he felt it was time to get out of the farming business,” says Bobby Miller Jr., a Paducah attorney who represents Mr. Eckstein. “[UBS AgriVest] is a very good entity to take over this farmland and to work with local farmers in the future. They will be a good citizen of Grant County.”

Institutional investment in Wisconsin farmland has previously focused on cranberry marshes and vegetable and potato production tracts in the Central Sands region. More recently, investment managers have focused on southwest Wisconsin’s corn producing counties for deals on the periphery of more competitive markets in Illinois, Indiana and the Mid-South. Last January, the Arkansas Teacher Retirement System paid $10.9 million or $7,098 per acre for 1,719 acres in Lafayette County.

This month, UBS AgriVest is expected to close on the purchase of 19,255 acres of mostly irrigated cropland in Texas’ northern high plains. The deal is estimated at $40.5 million or $2,133 per acre.

UBS AgriVest is buying its Texas land from Wexford Capital, a Greenwich, Conn.-based hedge fund manager that is liquidating a near 49,000-acre portfolio of cropland in Nebraska, Texas, Oklahoma and Kansas. In 2009, Wexford said it aimed to “build the Wal-Mart farming operation of the world.” Now the firm says it sees more compelling investment opportunities outside agriculture. Wexford paid around $95 million for its farmland in 2007 and 2008. If pending sales are completed, the firm appears poised to pocket $64 million in gross capital gains on its five-year land play. Market observers are watching whether other institutional investors will follow Wexford’s lead and harvest their capital gains.

The fund is managed by UBS AgriVest LLC, a Hartford, Conn. unit of Swiss banking giant UBS. The fund’s 27 investors are mostly pension funds ranging from the Sonoma County Employees Retirement Association and the Orange County Employees Retirement System in California and retirees of the Town of Manchester, Conn., to the Anchorage Police & Fire Retirement System and the Army and Air Force Exchange Service. The fund has generated a net annual average total return of 10.3% since its June 2006 launch. That lags the 13.4% annual return of the NCREIF Farmland Index, a gross return (before management fees) benchmark of all U.S. farm properties owned by pension funds. Still, the UBS AgriVest fund’s performance is more than double the stock market’s 4.6% return over the same period, as measured by the S&P 500 Index.

California’s current drought came on fast, and not long after the previous one ended, forcing some almond farmers t… https://t.co/UaZmPHpSny